The history of firearms is a lengthy one at that. The first recorded use of a firearm was in 1364, but the beginning of firearms goes even further back…to the 10th century in China to a weapon that is known as the pear-flower spear (Li hua ch’iang) and was the early form of the fire-lance weapon. The pear-flower spear is a spear-like weapon as the name states it’s a combination of a spear with a firework that would shoot out a small projectile or even poison along with the flame but of course it only has a range of a few feet so its main use was for close combat purposes, but this was a fundamental stage in the development of what we have now.

I will be covering various firearms, swords, daggers and many more in due time, but today I want to look at some firearms through American history.

Staring off with the Pennsylvania rifle. This rifle dates back to around 1760 in Colonial America with a 45-inch barrel and with a calibre of 11.4mm with the accurate range of around 365m when handled correctly. It is also the ancestor of the Kentucky long rifle that was created around 1840. The Pennsylvania rifle is a hybrid of two European based weapons. One being the English fowling piece and the other is the German Jaeger rifle both of which were created for hunting purposes. The German Jaeger rifle was a heavy-looking rifle which consisted of an extensive calibre of over .60 inches and was made for killing bigger game on the other hand the English fowling piece has a smooth bore, fairly lightweight and had a lengthy barrel and was designed to deliver minimal damage for killing small game. What this has created is the Pennsylvania rifle…with the lightness, delicacy and small smooth bore of the English fowling piece and the accuracy and rifling of the German Jaeger rifle.

Up next is the American Musket, although that can be a rather difficult one because there is quite a selection of them. I however will be covering the beginning of them in the late 1700s. First up is the first American Musket dating back to 1770s. It is a smooth-bore musket, and many of which resembled the ones used by the British forces in the American war of independence that is also known as the American Revolutionary war. This musket had a 45-inch barrel and with a calibre of 20.3mm.

The second musket was also created in the 1770s. It is still titled as the ‘American Musket’ as well but the difference with this musket is that it has a British lock that was made around 1750, with a 46-inch barrel and a calibre of 20.3mm. This musket was created because the United States required a reliable military firearm as they had a limited supply and therefore many of these muskets were created by using parts from other origins. 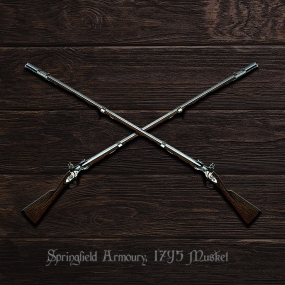 Now we’re coming up to the type one and type two American flintlock-based single-shot musket models that were made in 1795 by Springfield Armoury that has first opened up around 1777. First up is the type 1 musket model that was created after the end of the American war of independence. The Type 1 model is closely based on the French model of 1763… The Charleville musket. This was America finding its own brand when it comes to muskets and even throughout its service life the musket model type 1 has had various internal modifications, the original was always equipped with a 49-inch barrel with the calibre of 17.5mm and had a range of around 180m.

The type two American musket model is just a modified version of the type one musket. Both muskets were used for the Lewis and Clark expedition, and they were also issued by the United States government to its troops during the War of 1812 between the Americans and the British Empire, the Mexican war and the civil war. Even though this musket was originally produced by the Springfield Armoury, later on it was also produced at Harper’s Ferry in West Virginia.

Next up is the Rappahannock flintlock pistol was made by the Scottish Immigrant James Hunter who was known to be a rather successful iron maker and his creation was based on the 1760s British light Dragoon Pistol that were produced and then used in the Continental army. The Rappahannock pistol was the first of its kind in the US with a 9-inch barrel and a 17.5mm calibre. The first ever American manufactured military pistol, and it had a great impact during the American war of independence due to the American colonies being ill prepared to produce a high level of standard sized weapons for war.

Last but not least for today is one of the first pistols that was manufactured by a national armoury…the Harper’s Ferry pistol model of 1805. Technically there were two models of this pistol. First one was the smoothbore pistol and the second was the rifled pistol model. They were equipped with a 10-inch barrel and had a calibre of 17.5mm. They were made by wood, steel and brass, due to its durability it could also have been used as a club so if it doesn’t work or run out of ammunition you could always hit the enemy with it, as long as you were close to said enemy of course…or could try to launch it at them like a weighty frisbee. Nowadays the Harpers ferry flintlock pistol is in use as an insignia on the United States Army military police corps.

All of these firearms have got an interesting history behind them, their reasons for their use. You also see their development and how they came to be during hard times with a variety of designs, range, calibres and barrels.

This site uses Akismet to reduce spam. Learn how your comment data is processed.